Why oscillation occurred within my amplifier circuit?

Good day guys,
I am experimenting with audio amplifiers for a while now. I learned how to do an operational amplifier with discrete components and understand all its section and sub-circuits recently. Then I decided to just skip the hard part and use operational amplifier and output power stage for an audio amplifier to work as desired, instead of troubling with discrete components only. The goal from my earliest experimentation was to create around 100W audio amplifier based on this guide but the things went wrong as soon as applying DC to whole amplifier (no AC for now).
I have built this circuit few minutes ago on breadboard: 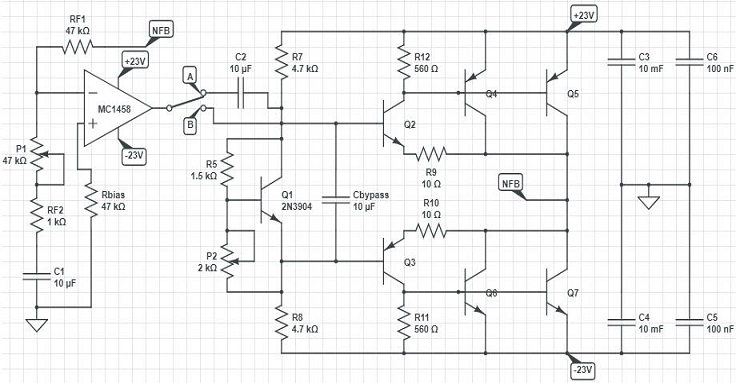 When I checked only output power stage with VBE multiplier (without MC1458 op-amp) everything worked just fine. But when I connected op-amp to it directly (no AC coupling - switch position B), as I increased Vce of VBE multiplier just a tiny bit, then the current through both upper and lower output power quadrants suddenly increased to 2A or more and stayed there or it was swinging like there was some kind of heavy oscillation within amplifier! As soon as I added AC coupling capacitor (switch position A), the darn thing worked as expected when Vce of VBE multiplier was changed. As it was increased with potentiometer P2 slightly also the quiescent current through power stage increased slightly - as expected.

Why did such heavy oscillation occurred within my amplifier circuit when there was no AC coupling capacitor between voltage amplification stage (MC1458) and output power stage (upper and lower Sziklai pair with paralleled power transistors)?

By the way, C3, C4, C5 and C6 represent AC bypass to avoid distortion when AC is applied to such circuit. At the collector and/or emitters of power transistors Q4, Q5, Q6 and Q7 there are no low resistance resistors for improving thermal stability of those because I have no low resistance (lower than 1 Ohm) high power resistor. Also, I have replaced MC1458 with another one (same part), but the results were similar (talking about example with no AC coupling capacitor).