i recently made significant changes to my entire system to make it more 'toddler friendly', and since i've seen a few posts from folks in the same situation, i though i'd post details here. previously i was running:

i was utterly and completely satisfied with my rig and felt it gave up only a little to even the highest end systems i'd heard, but, did not feel it was appropriate with a little guy in the house - the glowing tubes of the Atma-sphere amp were just too tempting for little fingers, and the heavy stand-mounted Cubs were simply too dangerous. so, after much research, i ended up with the following:

i've got the stradas high passed at 100 Hz with the Fathom augmenting the bottom end. right out of the box, the gallos sounded bad - really bad. so much so that i called my dealer, as the reviews i've read couldn't possibly have been talking about the same speakers, and was told to give them about 50 hours before passing judgement. i've now got approximately 40 hours on them and they sound VERY good. they truly have a level of speed and detail that i can only describe as electrostat-like. and the sweet spot, well this is unlike any other speaker i've ever heard... the sweet spot is pretty much anywhere in the room.

as satisfied as i was before, i feel like i've given up nothing with my newly configured system. in fact, in a lot of ways, my system has never sounded better. the spectron amp is a fantastic piece - one of those rare components that just does everything right - and if you're looking for small speakers, don't do as i nearly did and dismiss the stradas as too small to be taken seriously - give them a listen. they are amazing 'little' speakers that sound far larger than their actual dimensions. 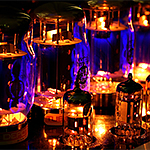