It has been over 4 years since I have ventured back into the DAC arena, a cautious adventure being that I was never satisfied with the sound quality of the Lampizator Level 4, Berkeley Alpha and an Eastern Electric DAC. All of them had their strong suits in one area or another but they were not at the level of my modified Modwright Sony 5400ES or Marantz SA8005 Tube CD Player.

I had been following the DAC threads for some time and was optimistic and hopeful that technology had improved or at least the deign implementation, so I private messaged a few knowledgeable members to get an idea on what they have heard and seen at shows and in their systems. After several suggestions and myself doing some reading and research on the different technologies, I decided that the Border Patrol with SPDIF would be my first entry back into the digital age.

The moment this DAC was installed into my system, I began to understand from my listening experiences that R2R was the DAC chip that provided an unmistakable level of musicality and toe-tapping emersion into the music. Now, I knew the direction that was set before me to find my reference DAC with R2R DAC Chips, Non-Over-sampling or filtering. I began to notice a trend in different approaches in the implementation/design of technologies and have heard through-out the Audiophile Community that Audio Note was the “Standard” in producing “Analogue Sounding” Digital to Analogue Conversion. The BP DAC solidified this in my mind, whose roots are also from Great Britain.

After discovering the similarities of these DACs, I decided to contact an Audiophile friend in Great Britain to determine if there were any DACS in the spot-light that was knocking on the doors or even beating the legendary Audio Note sound quality? He steered me to a small company that is taking Europe by storm and after a week of reading their philosophy and design implementation, I decided to contact the Founder, Managing Director & Chief Audio Engineer on which DAC would suit my system and yield the best sonics without spending an absorbent amount of money…

After making contact with Dr. Slawa, Roschkow, I took his recommendation on the SW1X Audio Design Dac II STD ($3,200) and I am in agreement with his Philosophy on design, implementation and many aspects I have never heard of but his knowledge is quite impressive to say the least and has been very responsive to all of my questions. Here are some aspects of my DAC listed from:

- Based on 2 x PCM56 K – the most refined and highest resolving sounding 16 bit DAC chips ever produced (yes, even cleaner and more refined than most 24/32bit Delta Sigma chips) directly connected to CS8414 S/PDIF receiver

As a reference, I have been listening to my new CDs that I got as a gift for the past 4 months which includes The Touré’-Raichel Collective (The Tel Aviv Session), Audio Note Ambassador, Vincent Be’langer CD titled Pure Cello, Three Wishes For a Rose, Ma Xinhua (Cello), Feng, Dan (Piano) and The Spirit of Gambo, The Galaxy Recordings (Direct Cut Super Audio CD) which I am a big fan of string type instruments and in fact is what I primarily listen to and have a good grasp on any changes that could be discerned by implementing new equipment within my system.

My DAC II STD (13.5” W x 16” D x 5 ½” H) safely arrived from Great Britain, unit was packed very well and received in pristine condition. Digital inputs include AES/EBU and SPDIF and the Output RCA has 2 sets of RCAs which I imagine one set are Silver or Rhodium-Plated Copper and the other Copper, so you will have a choice in fine tuning the sound you prefer and not to mention the possibilities of tube rolling to ones’ desires… I also believe USB inputs are also available upon request.

I delayed my initial impressions after install since I was waiting to accomplish our daily nightly routines with the kids before settling down in front of my system, knowing that it is going to take hundreds of hours before the capacitors starts to form and settle in and another 50+ hours to hear the tubes at their best; 96 total hours on DAC II. I cued up the first track on The Tel Aviv Session, Acoustic Guitar followed by Pure Cello was blown AWAY! I was hearing things that were never hinted at on my previous playback and quite frankly, didn’t hear this wearing Audiophile head-phones. I was struck by the uncanny realism of musicians occupying a physical space within my listening environment, I am talking about spooky and very a satisfying experience. Details WAY in the background comes through in spades and imaging/sound-staging is Off-the-Charts! I am hearing the air between the bow and the Cello as it begins to swell and every note played from top to bottom is distinctly transparent, fingers between the fret of the Acoustic Guitar that captures re-verb, spatial cues, ambiance, tonality, speed, timbre, PRAT and the illusion of the very presence of these instruments occupying a three-dimensional space along with the musician.

This DAC has it all and Percussion Instruments as well as voices has the same attributes of sounding Life-Like, Natural, Organic or whatever term you use to describe, you have the feeling of being transported to the recording venue…

You really begin to get a special appreciation for recorded music when you hear how a DAC like this SW1X Audio Design DAC II STD unravels the essence of the recording without altering the signal with up-sampling/over-sampling or applying filters. Implementing the DAC II STD into my system has been a revelation! I personally have never heard an Audio Note DAC and can only rely on those who have and the reviewer who has compared the DAC II side-by-side to the AN 2.1X and beat it, in fact, the DAC II held its own to the Uber expensive AN 4.1X and that says a lot about Dr. Slawa, Roschkow knowledge of circuit design, component matching and implementation, because the end result is all about the music…

Being that I was going to receive a Reference DAC, I wanted a cable that would not restrict but compliment the performance of the DAC II STD and decided to go with SW1X Audio Design Aero 10 which utilizes 100 % Silver in its SPDIF Cables; most claim 100 % Silver in their advertising but to discover it is silver-plated or the ground or return conductor is copper or plated and in my estimation is not 100%. My supposedly 100 % Silver SPDIF Oyaide DR 510 knocked off a more expensive and customized Silver Cable in the areas of sound-staging, imaging, detail retrieval and just a better sounding cable across the board and retails for $350+.

I was always under the impression that silver cables were bright, forward and analytical in their presentation but boy was I wrong. The Aero 10 is the best sounding Silver Cable I have ever heard and is in another stratosphere over the Oyaide. A very noticeable increase in spatial information, reverb, ambiance and detail retrieval is quite startling and at the same time sounds smooth, transparent, very organic and natural and this cable is not even close to being fully burned-in. From my cabling burn-in experience using a Audiodharma Cable cooker, it is at the 72-hour mark after removing the cable from the cooker when cable hits their sweet spot and I am needing another 48 hours to reach that point but will note more changes as the cable settles. Three days has passed since installing the Aero 10 and it is sounding beautiful, images are rock-solid and locked in place with a wide and deep sound-stage.

SW1X Audio Design has something special with their design and I believe that this is one of those DACS that will stay in your system for many years and the thought of chasing the latest chip will be quickly resolved upon powering up your SW1X DAC. This DAC and AERO 10 SPDIF Cable are “Highly Recommended”. 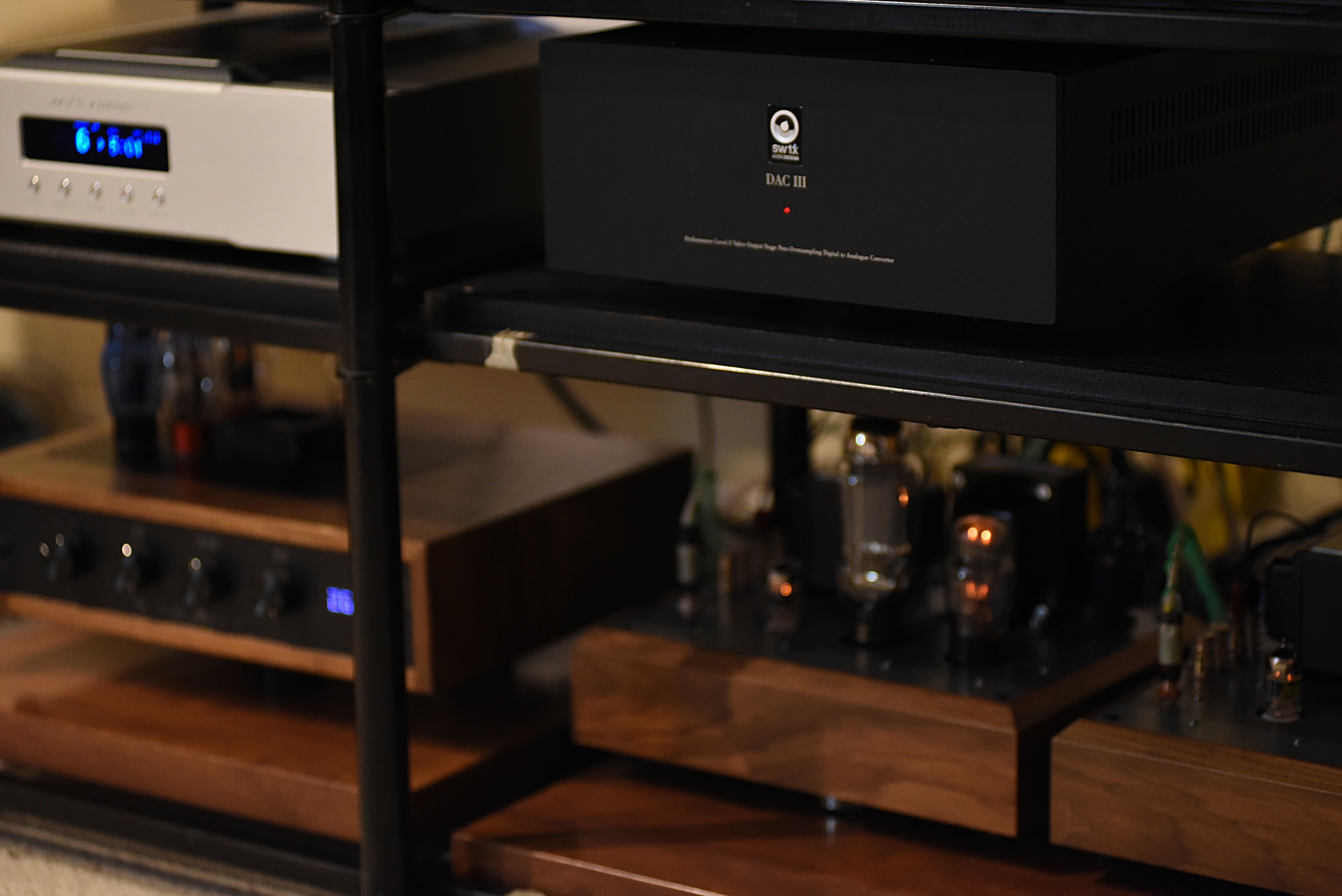